Let’s celebrate Your Vacations in India

Let’s explore the cultures in Nepal

Incredible Mystic India Tours is a professional tour and travels services provider around the India. Basically our head office is established in Jaipur Rajasthan, We are the Local Tours & Travels Company at Rajasthan in India, and also a Certified Travel Company by Government of Rajasthan & India Tourism.

We provides all type of India customize tour packages according to our guest desires and their requirements, We are special in Golden Triangle Tours, Rajasthan Tour & Travels Packages with connecting nearby other states cities like Amritsar, Delhi, Agra, Orchha, Khajuraho, Varanasi, Himachal Pradesh, Uttar Pradesh, Jammu-Kashmir, Leh-Ladhakh, South India, Kerala Tour Packages etc. In Case someone demanding only Car and Driver Services, We provide Car on rent with driver services. We provide also Nepal wildlife Tour, Trekking tour and religious tour packages including India Tours. We Can Book Train Tickets & Domestic Flight for our Foreign Clients.

Are You Plan any tour 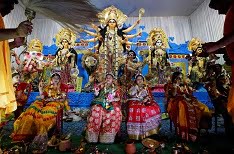 Navratri is one of the important festivals of India, which is celebrated to worship Goddess Durga. It is a nine-day festival, these nine days are entirely dedicated to Maa Durga (Goddess Durga) and her nine incarnations. The main story associated with Navratri is the fight that took place between Goddess Durga and the demon Mahishasura, who represents the ego. All the nine days of the festival are dedicated to each specific incarnation of the goddess; And each of these days has an important color associated with it, which devotees are expected to wear while participating in the festivities. So we have tried to break it down for you in easy words:

This festival is celebrated twice a year, the Navratri falling in the month of March is known as Chaitra Navratri. Most of the devotees of Goddess Durga observe a fast for nine days.

During this Nine days festival Many tourist come in India and Enjoy this festival ceremonies. During this Festival Organize Nine Days Fair near by Goddess Durga Temple. 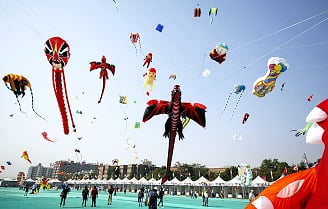 Kite festival is the most popular festival of Rajasthan and Gujarat. Kite festival is organized every year on 14 January on the occasion of Makar Sankranti and marks the end of winter season and the beginning of a new harvest season.

We celebrate kite festival in Jaipur. It is a one day festival so everyone celebrates the festival together. Makar Sankranti festival has its own importance. It is celebrated with different names in different states and this festival is also known as Uttarayan.

Diwali (The Festival of Lights)

Diwali or Deepawali  the festival of lights and the biggest festival in India, is one of the most important festivals for Hindus and is often compared to Christmas in the West. It is known as Deepawali, which is celebrated with a variety of lights, including lanterns, string lights, candles and firecrackers, symbolizing the symbolic defeat of darkness and the victory of good over evil.According to Hindu religions, the name Diwali or Deepawali comes from the Sanskrit word meaning “rows of lights”. According to Hindu religions, there are many legends associated with Diwali.Some believe that the day celebrates the return of King Rama, an incarnation of Lord Vishnu, and his wife, Queen Sita, who is an incarnation of Goddess Lakshmi, to Ayodhya after 14 years of exile, which the residents lit by rows of lamps. lit from On this day people worship and appease Lord Ganesha and Goddess Lakshmi and believe that both Lakshmi and Ganesha are the gods of wealth and prosperity.

During this Festival Many Tourist Comes to India tours and enjoy this festival rituals and ceremonies. 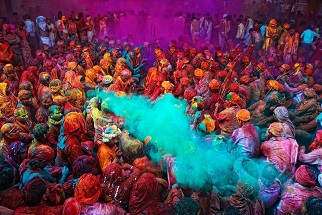 Holi -A festival of Colors

Holi is a festival of colors and it is one of the most popular festivals for foreigners as well as Indian Hindus. During this festival many tourists come to India and enjoy the festivities with colors and play Holi with local families. Holi of Mathura and Vrindavan is more famous in India and it is also celebrated with great pomp in Jaipur and Udaipur. The festival celebrates the eternal and divine love of Radha Krishna. The festival of Holi is celebrated every year in the month of March.

It begins on the night of Holika Dahan – the day before Holi – in which Holika, the sister of the evil king Hiranyakashipu, was seated in a burning fire carrying young Prahlad. Prahlad was a devotee of Lord Vishnu and was saved from the fire by his mercy, but Holika was saved. Later, Hiranyakashipu was killed by Lord Narasimha, an incarnation of Lord Vishnu. Holi – like many other Hindu festivals – celebrates the victory of good over evil. The festival of Holi is a symbol of unity in diversity. In this, forgetting mutual hatred, people apply color to each other and hug.